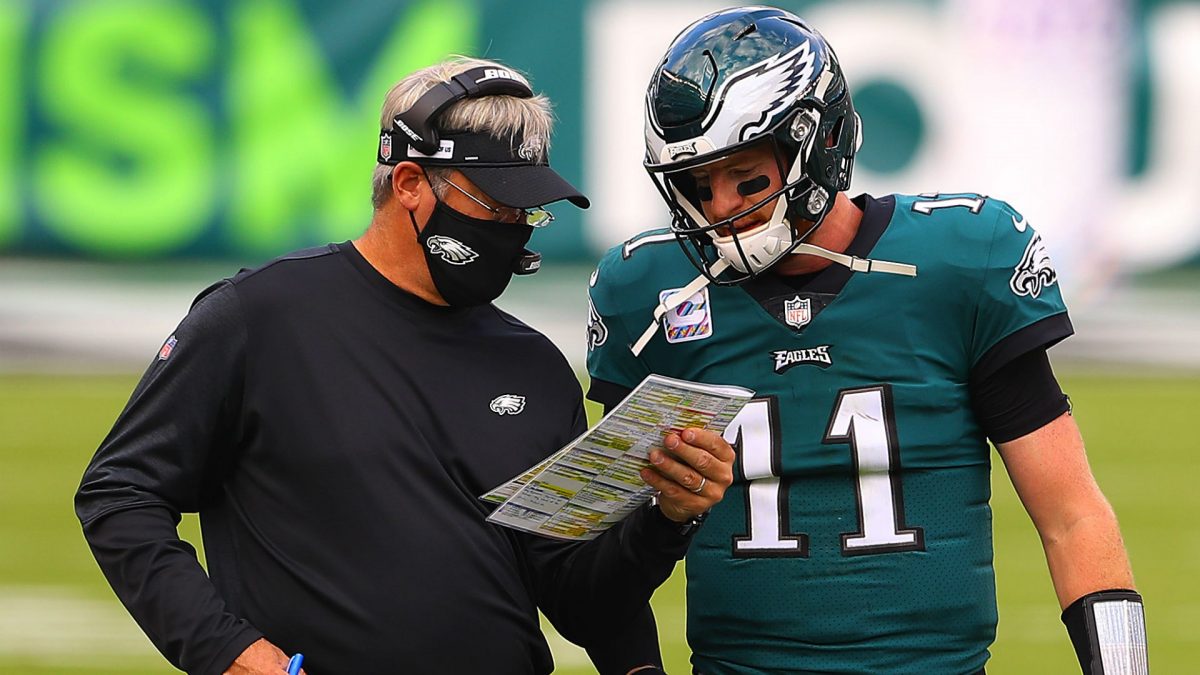 Players to Stash for the Fantasy Football Playoffs

The fantasy football playoffs are coming up, and in a week with few inspiring options left on the waiver wire, I decided to skip that article this week and prepare you for your upcoming playoff battles.

If your team is still trying to push for one of those final spots, I would recommend you focus on winning games. Stashing may be easier for teams who are nearly guaranteed a spot and need situational plays due to upcoming schedules.

Most of these players are rostered in under 50% of ESPN leagues, meaning there is a good chance you can scoop up one of them.

If you think this is a surprise after last week’s terrible performance, I can’t blame you. The great thing about fantasy football is that bad players can often put up a lot of points. If Wentz eventually gets benched in favor of Jalen Hurts, this is obviously not a great stash, but I think this week’s game against the Seahawks will turn things around and prove he puts them in the best position to win. Wentz still put up over 14 fantasy points last week, and previously had a five-game streak of at least fantasy points where he averaged 23.50 fantasy points per game. He gets to face teams with great offenses but defenses that are prone to getting torched. His remaining schedule: SEA, GB, NO, ARI, DAL. I’d feel confident keeping him on my team as options continue to run thin.

This may be the hardest position to stash, because everyone is filling their benches up with any remaining competent backs. You’re essentially taking your pick of backups who probably will not see significant work. Perine is still rostered in under 20% of leagues despite a decent week. I’m not chasing him just because of that touchdown last week. I was not a huge fan of Perine as a prospect, but it seems the Jets are giving him more opportunities despite Frank Gore continuing to put up respectable numbers. He was out-snapping Gore for multiple weeks, but has fallen just shy these past two games. It’s only a matter of time until Perine gets a full workload, and although the Dolphins are underappreciated on defense, I think we are ready to see him explode. His playoff schedule is quite tough on paper, but I think the Jets can do some damage on the ground to Seattle and Cleveland, especially if he continues to get the majority of the receiving work. He’s one of the few players in a split backfield you can still grab.

I should note that if Michael Pittman Jr. is still available in your league, stop reading and grab him. If he’s not, keep reading. It’s clear that Pittman is giving the Colts every reason to feed him, and it’s paying off. Despite an otherwise boring offense that is winning games in part due to a top notch defense, they’re actually putting up a lot of points. The Colts have been in a lot of close games as they have drawn a tough schedule, but things get better soon. After a rematch with the Titans, they get Houston twice as well as Las Vegas. I’m probably not starting him in week 16 against the Steelers, but Houston is allowing nearly 40 points per game to opposing WRs, while the Raiders allow about 38. As Pittman continues to dominate, he’ll likely get more attention which could leave Pascal open against soft defenses. If the Texans and Raiders want to make it a shootout, you won’t see me complaining. Pascal may not make your starting lineup but his schedule is something to consider. It’s not like T.Y. Hilton is getting any younger.

Like running back, tight end is a position that runs thin fairly quickly. At this point you either have your stud or are streaming someone. While Zach Ertz may be available in your league (he’s likely to return either this week or next week), you may not be inspired by your other options. Do you really want to trot out Logan Thomas or Jordan Akins with a championship on the line? If Tonyan is available (rostered in under 50% of ESPN leagues), he may be your only hope. He has seemed like a TD-or-bust player, but it helps when he has Aaron Rodgers, 2nd in both passing TDs and TD%, as his QB. His remaining schedule includes two great matchups against the Bears and Eagles before he draws the Lions, Panthers, and Titans in the playoffs. The most enticing of those has to be the Titans, who have allowed 6 receiving TDs to opposing TEs, but it’s likely that Rodgers can make magic happen no matter the matchup. He’s the boom play you can actually be hopeful about.

After a dominant performance against Carson Wentz and the Eagles, as well as an upcoming Jaguars game, they may not be available in your league. If you do manage to get your hands on them, don’t drop them. Streaming defenses has been difficult this year, but this team can be the key to winning you a championship. While I would not play them in their games against the Titans and Ravens, Cleveland gets both New York teams to finish out the fantasy season (assuming your league ends week 16).

The Jets allow 10 points per game to opposing defenses, and while they aren’t letting up a tremendous amount of sacks or turnovers, they’re dead last in both yards and points per game. The Giants are 30th in both categories but also turning it over a bit more often. Both are very safe options, and Cleveland’s defense has shown they can excel against subpar opponents. Remember, their performance last week was without Myles Garrett. Imagine what they can do when he returns.

Often the most forgotten and underappreciated part of both real and fantasy football, kickers still need some love. Matchup and offense can often help us make decisions on who to start, but they’re also a very streamable position. Outside of maybe a few teams in your league, nearly everyone rosters just one kicker, meaning there are plenty of options. Chasing players that will play in domes with the weather set to only get worse is a wise strategy, but I think it’s better to hold off for now and stash a skill position player or defense instead of a kicker. Sometimes you can get amazing performances from kickers on teams as bad as the Jets.

Players to Stash for the Fantasy Football Playoffs